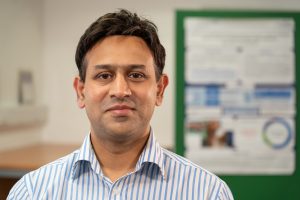 Prashanth Vas (MBBS, FRCP, PhD) currently works as a Consultant in Diabetes and Diabetes Foot Medicine at King’s College Hospital – the first dedicated multidisciplinary foot clinic in the world. Prior to this, he undertook his clinical specialist training in the East of England including Addenbrookes Hospital, Cambridge, which also included a period of research at the world-renowned Ipswich Diabetes Research Unit under the guidance of Professor Gerry Rayman, leading to a PhD.

Dr Vas’s current research is focused on the lower limb complications of diabetes, including the aetiopathogenesis and treatment diabetic foot ulcers, diabetic neuropathy (especially small-fibre neuropathy) and in the validation of new techniques designed for the early detection of neuropathy. Alongside Professor Rayman, he was involved in the development of the Ipswich Touch Test, now widely recognised as a simple reliable method for assessing loss of protective foot sensation, adopted by Diabetes UK as the ‘Touch the Toes’ test. He has also been a part of two ‘Quality in Care – Diabetes’ award-winning teams and has authored more than 60 publications.

Dr Vas has served as an expert advisor to the UK’s National Institute of Health and Clinical Excellence (NICE) and to the International Working Group on the Diabetic Foot (IWGDF). He is the co-founder of the British Diabetic Neuropathy Symposium, which is the only academic meeting in the UK on diabetic neuropathy. In addition to maintain an active clinical schedule at King’s College Hospital, Dr Vas continues to train and teach professionals to provide a high-quality diabetic foot and neuropathy service for patients so they can be seen as quickly as possible with the highest level of care.