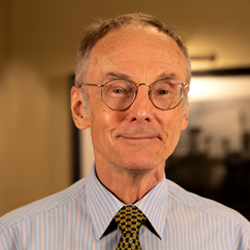 Roy Taylor qualified in medicine at the University of Edinburgh and is now Professor of Medicine and Metabolism at the University of Newcastle and Honorary Consultant Physician at Newcastle Acute Hospitals NHS Trust. He is the founder of the Newcastle Magnetic Resonance Centre. His role encompasses application of magnetic resonance methodology to clinical medicine, metabolic research in diabetes, clinical outcome research in diabetic pregnancy, prevention of blindness by retinal screening in diabetes, and teaching in diabetes and obstetric medicine. His expertise also extends to management of pregnancy in type 1 diabetes, type 2 diabetes and gestational diabetes, and management of hyperemesis gravidarum.

In the ReTUNE study, Professor Taylor’s team is now testing whether type 2 diabetes in people who have a normal BMI is also caused by too much fat inside the liver and pancreas.

He lectures on the new understanding of type 2 diabetes nationally and internationally, and his named lectures include the Banting Lecture of Diabetes UK in 2012, and most recently the Sir Robert W Philip Lecture of The Royal College of Physicians of Edinburgh in 2021.