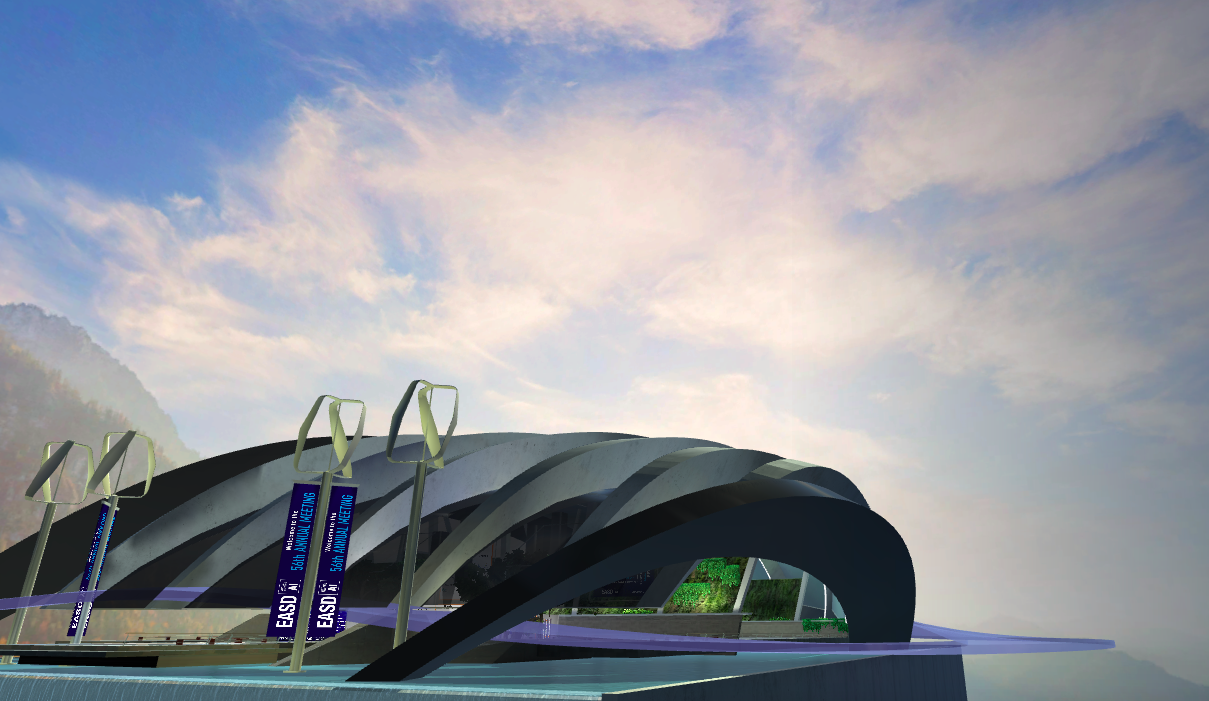 For obvious reasons, this year’s Annual Meeting was a virtual affair. Which meant that instead of the usual crush of researchers and healthcare professionals, the EASD plaza was populated by surprisingly slender avatars and everyone got a front-row seat at the lectures – albeit via their laptop or mobile screen. (For anyone who has ever struggled to keep pace with slides, imagine the screenshot opportunities that presents.)

Proceedings began with an impassioned address from EASD President Stefano Del Prato, in which he paid tribute to the heroic efforts of healthcare professionals around the world in response to the COVID-19 pandemic. His address was followed by an elegant lecture from Professor Takashi Kadowaki, presenter of this year’s Claude Bernard lecturer. This was a penetrating, wide-ranging, talk, entitled simply enough ‘What is type 2 diabetes?’ − but in answer to that question, Professor Kadowaki was able to draw on over 35 years of his own research into the complex interplay of genetic and environmental factors that lies behind that other great pandemic of our time.

After outlining his early involvement in identifying the first insulin receptor gene mutations associated with type 2 (IRS-1 and IRS-2), Kadowaki recalled the crucial role played by IRS-knockout mouse models in his work – emphasising the importance of both insulin resistance and insulin secretory defects in type 2 diabetes’ pathogenesis. His account of the role of IRS-1 and IRS-2 in type 2 led on to exploration of a role for the fat-specific hormone adiponectin/AdipoR in reversing obesity-linked insulin resistance – potentially the basis for a novel class of drug. This was followed by an examination of the differences in genetic susceptibility to type 2 diabetes among Japanese and East Asian versus European populations – differences with significant implications for treatment (for instance, the more potent glucose-lowering effect of GLP-1 in Japanese people compared to Europeans). Professor Kadowaki concluded with a call for the next generation of researchers to take up the challenge of gaining new insights into type 2 diabetes.

On next, by the merest touch of a button (no traipsing round the halls this year) to the Oral Presentations. Of the morning’s many oral sessions, the one on epidemiological research into complications yielded some particularly fascinating insights. With her study of mortality in type 2 diabetes patients, Maja Kristiansen revealed a surprising relationship between circulating levels of insulin-like growth factor binding protein-2 (IGFBP-2) serum and metformin in patients with no comorbidity. Perhaps significantly, this association was not seen in patients with comorbidities (might comorbidity be the regulating factor?). Soraya Soulimane presented a new study based on relatively old data – from the EURODIAB study − this time looking at protective factors against cardiovascular complications (better HbA1c ranked especially high – albeit based on data in which HbA1c levels were especially impressive).

Others focused on complications less commonly studied for their association with diabetes: sleep apnoea and dementia. Thomas Karagiannis looked at what meta-analysis of cohort studies into sleep apnoea and type 2 diabetes can tell us about the relationship between the two, highlighting a two-way association. After adjustment (including for BMI and obesity – a key confounder in such a study), presence of severe apnoea was associated with a two-fold increase in risk of type 2 diabetes. The association was not so robust in the other direction, however, partly to do with the nature of the available studies (Karagiannis noted a lack of objective assessment of apnoea, particularly in the larger studies). Better-defined research should further illuminate this relationship.

Finishing the session, Carlos Clis-Morales presented a study based on data from the Swedish National Diabetes Register. This explored the relationship of HbA1c and type 2 diabetes with dementia. Recent research suggests that up to a third of dementia cases may be attributable to modifiable risk factors, including type 2 diabetes – which is thought to account for 3.2% of all dementia cases. This study confirmed that association (people with type 2 diabetes were shown to be at heightened risk for all forms of dementia), but also refined it – revealing, for example, that the relative risk is significantly higher for vascular dementia than it is for Alzheimer’s. This was a thought-provoking study and its continuation promises further insights in the future – including investigation of possible interactions between dementia and type 2 diabetes medications, as well as with hypoglycaemia.

A quick break for lunch − during which our new GLP-1 receptor agonist course was launched, occasioning a lively Q&A session with the authors and over 700 attendees. And then, off to the Salzburg Hall (virtual, of course) for another oral session, this time on ‘Better insulins’ – a timely event with the 100th anniversary of insulin so close to hand. This session proved a big draw, offering presentations on a number of much-anticipated novel approaches. Ultra-rapid insulins figured large – hailed as the next step towards physiological insulin substitution − with two presentations, one on a Phase 1 study of AT247 from Eva Svehlikova; another from Mark Warren on a Phase 3 double blind study of UltraRapid Lispro (URLi). Both showed promising results with improvements in postprandial glucose control (PPG), although URLi − being at a later development stage − was perhaps the more newsworthy. Compared with Lispro, when delivered by CSII in patients with type 1 diabetes, as well as better PPG URLi demonstrated non-inferior HbA1c reduction and less hypoglycaemia. There were ongoing problems with site reactions, although Mark emphasised that these were mild and only two out of the seven participant discontinuations had been site-reaction related.

At the other end of the insulin-action spectrum was a presentation from Julio Rosenstock on Icodec – a once-weekly basal insulin at Phase 2 stage of development − with results from a study comparing it with once-daily insulin glargine in insulin-naïve people with type 2 diabetes inadequately controlled on oral antidiabetes drugs. The overall aim behind this novel form is to improve acceptance of treatment and reduce clinical inertia and the results so far have been encouraging – with similar glucose-lowering and safety profile to once-daily insulin and, significantly, low overall rates of hypoglycaemia. Based on these data, Icodec will be further investigated in a comprehensive Phase 3 clinical development programme.

Also of particular interest in this session were presentations on oral insulin. The challenge here, of course, is how to get insulin safely through the hostile environment of the gut. Approaches presented here included inhaled insulin (Marisa Jones on ‘technosphere insulin’) and, perhaps most interestingly, an oral peptide delivery system that targets insulin absorption in the liver.  Roy Eldor’s presented results from a 12-week trial of the evening oral insulin pill ORMD-0801, which showed clinically significant HbA1c reductions among type 2 patients inadequately controlled on standard therapies (HbA1c >8%), without significant increase in hypos. In the question and answer session after his presentation, Roy suggested the treatment might also be used for patients with type 1 diabetes, not to replace injections but as an adjunct. In particular, he suggested that the effect in the liver might help tone down variability of glycaemia in type 1 patients.

And so to the culmination of day 1: the Camillo Golgi lecture, this year given by Naveed Sattar, who took us on an energetic romp through ‘Cardiovascular risk in diabetes’. In a rigorous and sometimes humorous lecture, which paid generous tribute to the work of others, Professor Sattar repeatedly pressed home the terrible significance of type 2 for health – doubling cardiovascular risk – but also gave cause for hope, emphasising how far earlier diagnosis, lower glucose and improved BP and lipid therapy have managed to lower that risk over recent years. New drugs are also having an impact and will continue to do so. This was a call to arms, not a cry of defeat. He also pointed out that HbA1c only makes the difference once you get frank diabetes – until that point, excess risk is driven by the usual CVD risk factors. His analysis of the heterogeneity of risk – by age, sex, ethnicity, diabetes type – was especially compelling, driving home the urgency of better targeted interventions. Questions abounded: why do you need to put on less weight to get type 2 diabetes as you get older? Insights and strictures too: For every decade earlier that you develop diabetes, you lose four more years of life expectancy. We need to focus more on weight-losing modalities in people with younger onset type 2 diabetes. We need to treat blood pressure more aggressively in younger people with type 2. We should be as aggressive treating diabetes in men and women. As so often during this year’s meeting, COVID-19 was a looming presence. Acknowledging the particular vulnerability of people with diabetes, as people whose systems are already compromised, to the ravages of a hyperimmune response, Professor Sattar also found a more optimistic note on which to finish day 1 of the conference – with the hope that the experience of COVID-19 might finally persuade policy makers to see tackling obesity and diabetes as a matter of urgency.