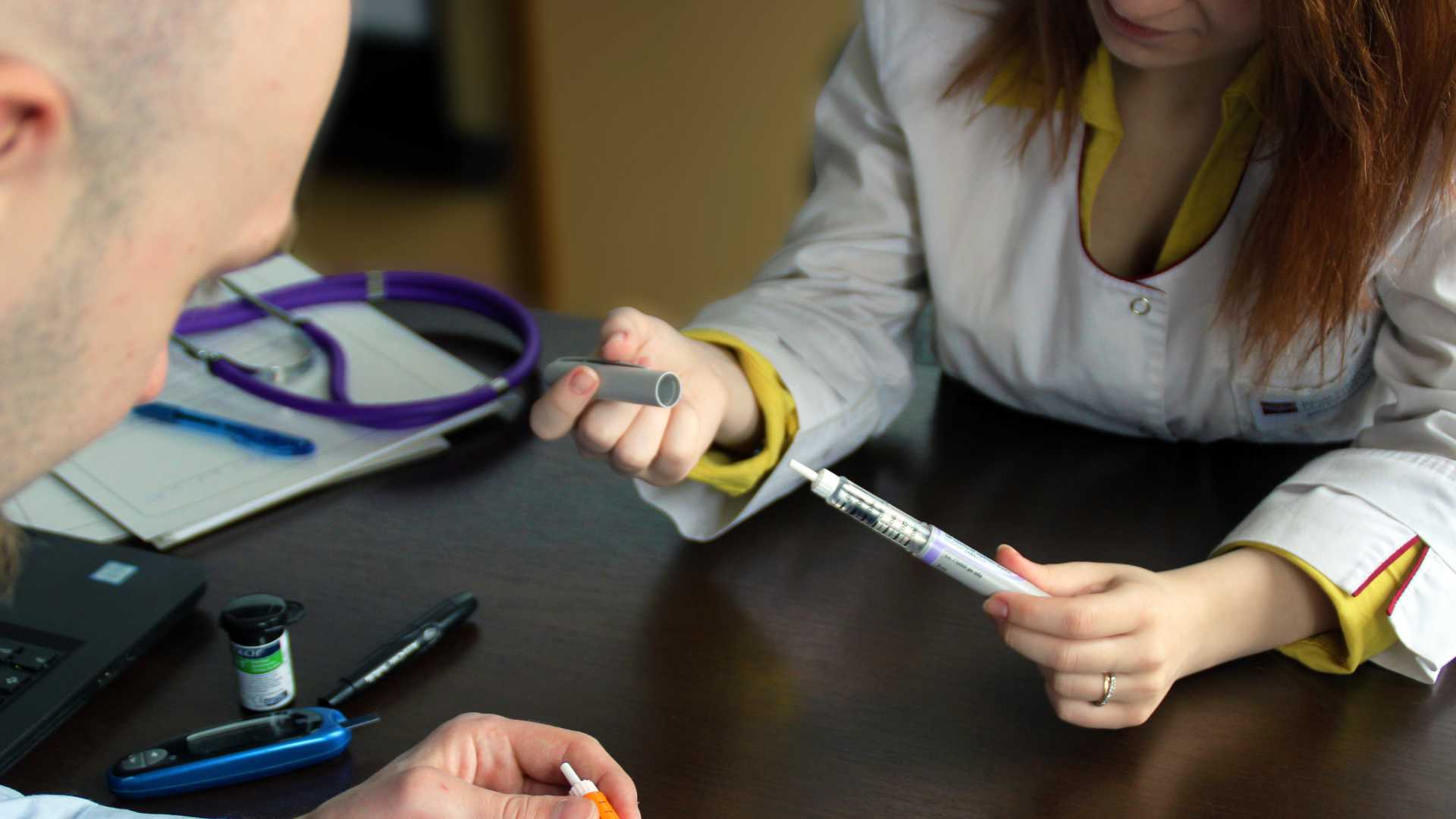 The discovery of insulin just over 100 years ago was one of the most significant moments in medical history. It is still essential for those with type 1 diabetes and, today, increasing numbers of people with type 2 diabetes rely upon insulin for their health and wellbeing.  Three case studies presented at at the UK’s Primary Care Diabetes Society Conference (PCDS) at the end of 2021 helped delegates to focus on the practicalities of insulin management. Dr Susan Aldridge reports.

“I am asked to talk about insulin every year at the Primary Care Diabetes Society,” Jane says. “I think that this shows that we in primary care do have a role to play in insulin management, even if this is limited. Insulin is a high-risk medication, so we do need some understanding, particularly when there are so many different insulins out there.” She added that dose adjustment is probably one of the most challenging aspects of insulin management, made harder by the fact that there is no consensus, nor single guideline, on how this should be done. However, there are some guiding principles and these were used by Jane and Su to present three patient scenarios that were typical of those you might encounter in primary care.

Richard is a 66-year-old, recently retired plumber who has had type 2 diabetes for 10 years, lives with his wife and has recently joined the practice where Jane works. His BMI is 32, although he has been able to lose a few kilograms in recent years, as he is on dapagliflozin and semaglutide. He admits he’s never been a fan of exercise and has become even less active during the pandemic. He is on metformin and, when his HbA1c rose to 68 mmol/mol, a decision was made at his previous practice to start him on insulin glargine. His HbA1c is now 72 mmol/mol.

“He says he’s giving himself 12 units of the insulin glargine every evening. He can vaguely remember being asked to increase the dose when it was initiated, but he’s been really busy, so he hasn’t remembered what he’s supposed to do in terms of adjusting his insulin,” Jane said.

What else do you need to know about Richard to help him with his insulin? “I think it’s really important to check adherence, particularly with a drug like insulin when there are often barriers. You weren’t initially involved, so you really need to explore with him now whether there was reluctance to go on insulin.”

The HbA1c reading is a fairly blunt tool when it comes to assessing glycaemic control on insulin. “We really do need sight of his home blood glucose monitoring. We need to find out if he’s been doing that, what time of the day, what are his results and do they match up with the HbA1c that we’re seeing?”

It is clear that Richard’s basal insulin first needs to be optimised. The really important factor is this needs to be easy. This insulin will target fasting hyperglycaemia and hyperglycaemia between meals, rather than the rise that you get following food. “With that in mind, we should really be using fasting blood glucose levels from his home readings to guide us as to how well his insulin dose is doing,” Jane said.

Guidelines from the Royal College of Nursing (RCN) on once-daily insulin titration recommend starting with 10 units of basal. “Generally, in practice, that’s what I do.  So, in fact, he was started on 10 units. Based on this recommendation, you monitor blood glucose and adjust the dose once weekly, as in the RCN chart.” For this you need to ensure that someone knows to add those readings over the week and divide it by 7 to reach the average, and then follow the table. “What I sometimes do in practice is to get people to do their blood glucose every day and look at three days of reading and, if they are above target, to increase their insulin by two units. I think another option for people is to increase by one unit every day while not achieving their fasting target. I think it really depends on what works for the person and what suits them best but, wherever possible, we should try to hand over that responsibility of titration.” There’s good evidence that people get on better doing it that way rather than relying on the nurse to call them up on a regular basis.

Some of the basal insulins have a longer duration of action, so it takes longer to achieve a steady state. Here Jane’s recommendation is for a once-weekly dose titration. Many of those on a daily human insulin choose to take it at night and here Jane suggests that they measure its effectiveness using their pre-breakfast glucose reading. If three consecutive readings are elevated, then they should consider increasing their insulin dose, either by 2 units or 10% of the baseline.

Stephen is a 54-year-old pharmaceutical rep who has had type 2 diabetes for six years and is married with two teenage daughters. He has been working from home, which has had a negative impact on lifestyle choices, for he has been eating unhealthy snacks throughout the day and has become completely sedentary. Su also discovers that he’s worried about losing his job and is really missing the face-to-face contact. He is on metformin, gliclazide and alogliptin, but could not tolerate an SGLT-2 inhibitor because of recurrent thrush.

He has come to the surgery complaining of nocturia, increased thirst, feeling really tired and balanitis. His HbA1c has increased from 58 mmol/mol to 103 mol/mol. “Now, we’d always be a bit concerned about such a significant rise in HbA1c and would want to rule out pancreatic pathology,” Su said. “It’s difficult in Stephen’s case to determine how quickly the HbA1c has risen, because he’s not been attending for regular review over the pandemic. Hopefully he has been doing some self-monitoring, which would give a better idea of how quickly this deterioration occurred. You can also enquire about any signs and symptoms, such as weight loss, which might make you be more suspicious. In this case, we’ve ruled out pancreatic disease.”

So, in this situation what are the options and what do we need to check?

“When Stephen brings in his blood glucose monitoring diary, we can see that all his glucose levels are 18 to 25 mmol/l. This accounts for the huge rise in HbA1c and the symptoms. So, the next thing we have to think is of is these lifestyle changes that happened during lockdown, with the sedentary lifestyle and the change in diet. Can these be reversed? We’ve got to be realistic when someone is feeling really symptomatic from these really high glucose levels. We need to understand what his greatest concern is, and need to do something to normalise that glucose quite quickly,” Su said. Working on lifestyle can come later.

So, while ultimately she might choose different medications for Stephen – such as a GLP-1 receptor agonist – temporarily it would be good to use insulin here to bring his levels down. “Sometimes, if you put other therapies in now, with the levels this high, it may take too long to bring things down. “ Su would start with just a background insulin and titrate that up to get Stephen’s glucose down to the 10-15 mmol/l level and, at that point, she would think about to introduce a new therapy and stop the insulin therapy.

Doris is 87 years old and has had type 2 diabetes for 27 years. She lost her husband four months ago and now lives alone. She has lots of comorbidities, including chronic kidney disease, heart disease and hypertension. Current medications include metformin and 56 units of Humulin M3 twice a day, which she administers herself and her HbA1c is 81 mmol/mol, down from 88 mmol/mol.

“What really strikes me here is the steady decline in HbA1c and BMI. She has lost 4 kg since we last saw her and is no longer in overweight category,” Su says. “Her family has noticed she’s getting a bit forgetful, so there is a question now as to whether she is missing some of her insulin or maybe not eating as much as before. The weight loss and the drop in HbA1c are telling me that we need to be watchful for hypoglycaemia and do something about the insulin regime she’s on.”

This means thinking about what target HbA1c should now be set for Doris.  If she is assessed as being moderately to severely frail, then an HbA1c of 64 to 70 mmol/mol could be set for her, according to global guidelines. The other things to consider are her polypharmacy and comorbidities, her functional status and whether she is at risk of falls. “There is also possible cognitive dysfunction, and I wonder if she’s depressed too, as she has recently lost her husband,” Su said. “All these things would play a part in where I would set her target HbA1c.”

And behind this target there is daily variability in blood glucose. “I’d be mindful that Doris may not recognise a hypo in the same way she once did. Her morning blood glucose readings are low, so I wonder if there could have been a hypo overnight? Hypos in the night don’t always wake you. What she may notice is poor sleep, being quite restless at night, nightmares and, if she wakes up, not really knowing where she is. So always ask around this and maybe even ask someone to wake up at 3am and do a glucose for you. Always review the insulin regime if someone has had a severe hypo. For Doris, relaxing her target will help with this, and one of the simplest way of doing that is to just take out that quick-acting insulin.”

The total daily dose should always be adjusted depending on whether the patient is below, at, or above their new target and you might think about moving from twice daily to once daily basal insulin to simplify things. Observe a pattern of glucose results over three to four days – don’t change insulin doses based on a single high or low. Increase in 10% increments and decrease by at least 20%.

“Preventing hypos always takes precedence over correcting hyperglycaemia,” Su says. “Usually, when you’ve sorted out the lows, the highs tend to look after themselves.”

When to refer on

As Jane mentioned at the outset, the role primary care healthcare professionals play in managing insulin in type 2 diabetes is important, but limited. Referring on is necessary when there are still hypos and glucose and HbA1c are not responding to the change in regimen or if the patient is having continued hypos and you can’t identify the cause. The presence of hypoglycaemia unawareness is another cause for referral, as are unexplained glycaemic patterns. Finally, when you, as a primary care healthcare professional, think you’ve reached your own competence and confidence level in changing an insulin regimen, it is time to refer on.

Any opinions expressed in this article are the responsibility of EASD e-Learning Programme Director, Dr Eleanor D Kennedy.