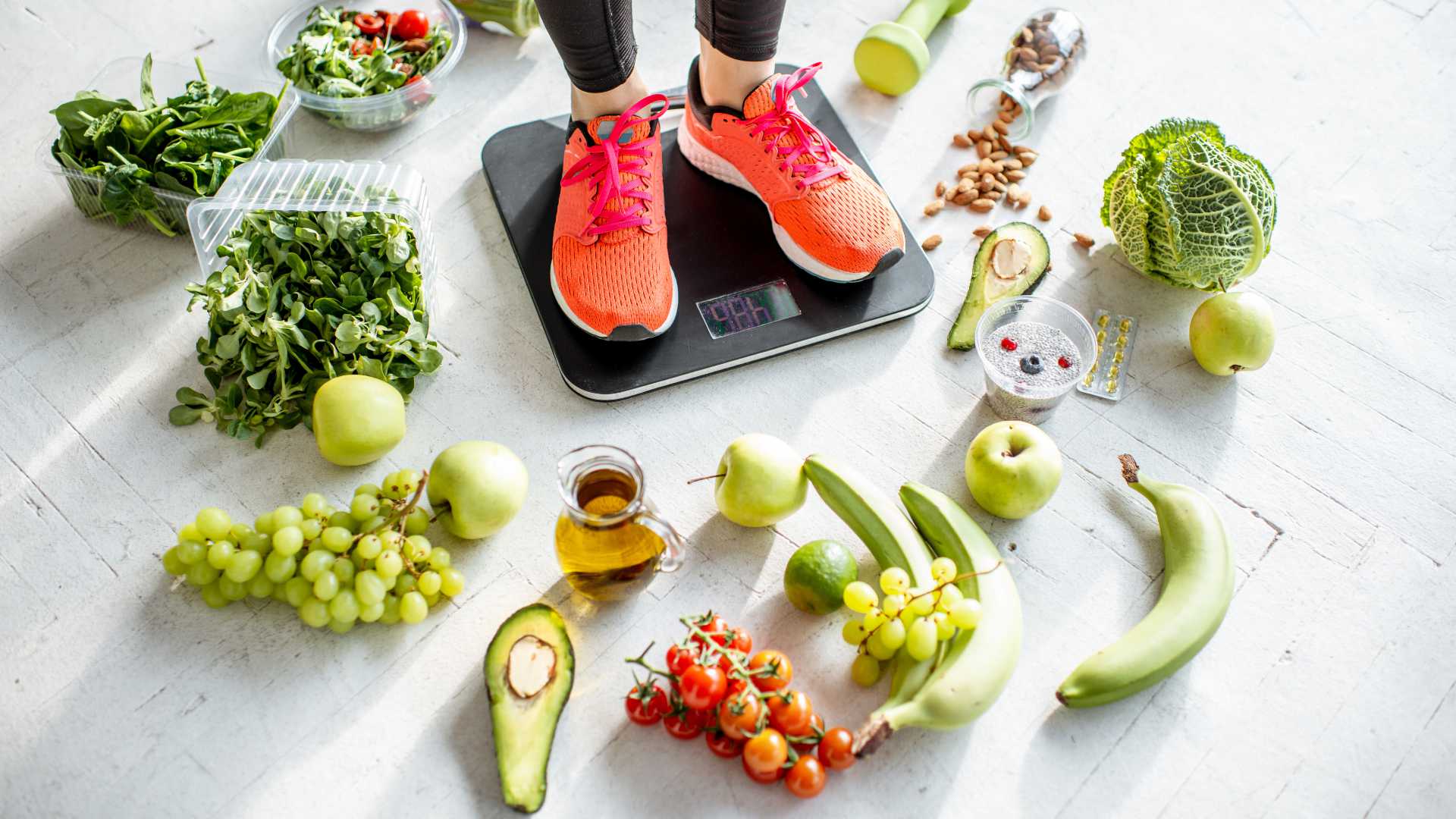 Weight loss – an important goal for those with or at risk of type 2 diabetes – is high on many people’s list of New Year’s resolutions. For those wanting to lose weight in 2022, a new review published in Diabetologia this month suggests reducing overall calories rather than intakes of certain foods may be the best way to achieve both weight management and diabetes remission. Dr Susan Aldridge reports.

Recent research suggests that type 2 diabetes develops when someone exceeds their personal weight ‘threshold’. Ectopic fat accumulation in the liver, pancreas and muscle leads to high blood glucose, the diagnostic hallmark of type 2 diabetes. But during an intensive weight-loss programme, or after metabolic surgery, loss of this fat improves hepatic and muscle insulin sensitivity, which may lead to remission of type 2 diabetes. Follow-up from the Diabetes UK-funded DiRECT study, where participants achieved remission through rapid weight loss, shows that this non-diabetic state can be maintained for as long as two years for the majority of those who lose over 10 kg of their body weight. These findings have helped raise awareness among both patients and healthcare professionals of the potential long-term benefits of weight loss in type 2 diabetes.

What they need now, though, is up-to-date and authoritative advice on which kind of diet to follow in order to achieve the goal of remission. And while remission itself is less likely in those with a long duration of type 2, weight loss and weight management will still help improve long-term health outcomes. There is no shortage of information and choice on dietary approaches – quite the reverse, in fact, giving rise to a plethora of further questions to puzzle over. (Is the Mediterranean diet the way forward? Low-fat, low-calorie or low-carb? Maybe meal replacement works best for rapid weight loss… and so on.)

Motivation may be higher than ever, but if weight loss efforts are not to go to waste it needs to be driven by advice based upon hard scientific evidence. In practice, any calorie-reduced diet will lead to weight loss, whether specific nutrients or overall food intake are restricted. The problem is that adherence and actual weight loss vary widely within the same diet plan and comparisons between different diets often give conflicting results. And people may put weight back on after the diet, so what is the best way of sustaining the initial results?

It’s been hard to develop evidence-based guidelines for healthcare professionals on diet because systematic reviews and meta-analyses often offer conflicting evidence. That is why a team, led by Professor Mike Lean of Glasgow University, one of the principal investigators in the DiRECT research, now presents a new review of dietary approaches in type 2 diabetes – published in the January 2022 Diabetologia[1]. This is part of a programme of work to update the EASD’s own dietary recommendations and is intended to inform clinical decision-making and guideline development going forward. The paper includes an ‘umbrella review’ of meta-analyses of randomised controlled trials (RCTs) of diets for weight loss in people with type 2 diabetes. There is a separate review of studies reporting on type 2 diabetes remission. After searching the literature and expert assessment, studies were classified as high, moderate, low and critically low quality.

The literature search, to 7 May 2021, found 19 meta-analyses worthy of inclusion, of which 18 reported direct comparison with a control diet, consisting of either usual care or a particular dietary regimen. Only seven studies were of high quality.

Ten studies reported on low-carbohydrate diets compared with higher-carbohydrate diets. One problem with assessing low-carb diets is that the definition of ‘low carb’ varies. In these studies, definitions included <130 g/day and <26% or <45% of energy intake. Duration of diet varied too, from eight weeks to four years. So it’s hard to make valid comparisons. However, four high-quality studies showed that lower- and higher-carb diets were equally effective, with the mean difference of only one to two kilograms of weight loss between them. The Mediterranean diet and its variants are often promoted for health and weight loss and were the subject of two meta-analyses here. The first showed greater weight loss (0.3 kg) on the Mediterranean diet, as did the second (1.8 kg), in comparison with controls that included usual care and specified diets, such as low-carb and low-fat diets. However, these were low-quality studies.

Formula meal replacements are a popular approach to weight loss, maybe because of their simplicity. In this review, one high-quality meta-analysis of nine randomised controlled trials (RCTs), including 931 participants, reported that replacing one to three meals a day did produce significantly greater weight loss of around 2.4 kg, compared with a low-energy diet. Even better results, of around 6 kg weight loss at three and six months, were reported for very-low-energy diets compared with an energy-restricted diet, in a high-quality meta-analysis of two RCTs.

With ‘vegan January’ rivalling ‘dry January’ in popularity in 2022, it’s encouraging to learn that a vegetarian diet led to greater weight loss than control diets. The downside is that the studies were deemed to be of low quality, as were three trials testing another popular trend ­– intermittent fasting – two of which showed no benefit, while the third did show 1.4 kg average greater weight loss compared with controls.

The systematic review found 14 studies on remission worthy of further study. Two RCTs (DiRECT and DIADEM), which had an induction phase of total diet replacement performed well, leading to remission in 54% of participants at one year with mean weight loss of 10 to 12 kg, compared with 4–12% in the control group. These trials were designed with remission as the primary outcome, but there were also trials reporting post hoc analyses for remission. Among these, one that used two meal replacements a day during the first 20 weeks and one per day afterwards led to mean weight loss of 8.6 kg, with 11% of participants achieving remission, compared with only 2% in standard care.

There was a single RCT of the Mediterranean diet over 12 months that reported 12% remission, with a mean weight loss of 6.2 kg compared with 4% and a weight loss of 4.2 kg in controls on a low-fat diet. However, there was some concern over risk of bias in this trial. Finally, there was a non-randomised controlled study of a very-low carbohydrate (ketogenic) diet that reported 20% remission, with an impressive 13.8 kg weight loss at one year, compared with no remission in the control arm. However, this study was also thought to have a serious risk of bias.

Overall, very-low-energy diets and formula meal replacements produce greater weight loss than do more conventional low-energy diets. Despite claims in the media, the evidence does not favour low-carb diets over higher-carbohydrate diets. Nor does it favour any other particular dietary approaches, such as Mediterranean or vegetarian over contrl diets.

However, while the evidence doesn’t suggest any important differences in the composition of a weight loss diet in type 2 diabetes, cost-effectiveness should be taken into account. The DiRECT trial with its total diet replacement was estimated to be more cost-effective and cost-saving than standard care, because of savings in medication costs and fewer complications.

Health benefits from weight management in diabetes come mainly in the longer term. Most of the evidence here relates to shorter-term outcomes, with few trials reporting findings beyond 12 months. There is, however, increasing evidence that long-term weight maintenance is more likely following early rapid weight loss, as in the DiRECT and DIADEM trials. Programmes offering support to help sustain new behaviours and relationships with food can help maintain weight loss over a longer time period, and this may be so no matter what dietary approach is adopted.

Food is a fundamental for personal and social wellbeing and being on a diet can be challenging. Patient preferences, culture, context and lifestyle need to be taken into account in conversations and decision-making between the person with diabetes and the healthcare professionals caring for them.

Most type 2 diabetes is treated in primary care, which was the setting for DiRECT and DIADEM which use total diet replacement. It may be that simpler food-based programmes may work equally well, particularly with skilled and empathic healthcare professionals to provide support. One evaluation from a GP practice in England reported weight loss and remission in 59 out of 128 patients on a low-carb diet for a mean of 23 months in a programme running since 2013.

Maybe the best advice is still for people with, or at risk of, type 2 diabetes to adopt a dietary approach you can stick to – or even enjoy – as even modest weight loss (5% or so of body weight) will have some benefit.

Given the findings of this review, the authors conclude that future trials of similar diet comparisons are not likely to add useful information. Instead, evidence from clinical practice is needed to identify safe and effective approaches to achieve and maintain weight loss with available skills and training in primary care. Research should also focus on assessing long-term outcomes from high-quality trials and prospective audits of practice with different diets.

For more on type 2 diabetes and weight loss, why not enrol on our module ‘Obesity and diabetes’?

See also the first instalment of our new series ‘The briefing room’, which brought together six leading lights of obesity research to discuss how we can best help people with obesity.